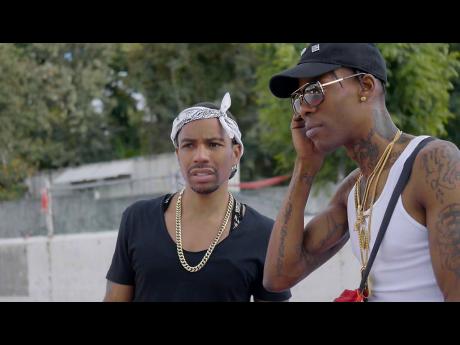 Hip-hop and rap artistes are known to come from rough pasts, inspiring some of the greatest hits of the genre, says recording artiste Jakal, a deportee who speaks his reality without reservations.

"I always knew I could rap, or could 'spit bars' as the 'hood' would say, but I'll admit that I never took it serious until my time in prison, where I met H Money Bags. He was the first rapper that told me I had talent. People always told me my skills were nice but he was signed to Jay-Z, so his opinion meant a little more," Jakal told THE WEEKEND STAR.

Jakal continued to pursue rap even after his return to Jamaica, the home of reggae and dancehall.

The plan, he explained, "Is to solidify my spot in the Jamaican music industry by continuing to present quality music on a consistent basis. I have stayed true to my form and I am gonna continue to do so."

Following a year of hard work, the rapper has finally managed to release his debut album Deportee.

With tracks such as Mission Accomplished, Hands Up and I Feel Like Kartel, the entertainer expressed that the lyrics were born out of creating his own ray of light in a dark place.

"With I Feel Like Kartel, I am saying I know what it's like to have everything taken from you and the mental anguish that comes with that," he said. "I am definitely trying to change the negative stigma attached to deportees globally. Honestly, I am trying to get rid of the stigma completely and change the whole narrative. I feel that by the single act of naming the album Deportee will inspire an entire society and show deportees like myself everywhere that 'it' can be done."

The 'it' he speaks of is creating a positive brand out of something considered negative.

According to the album's producer, popular DJ Rush (also owner of YRush Music), the 19-track album and the time it took to complete was part of the brand-building process.

"If we don't build a brand, then we are like trees without roots or an artiste without true fans, stuck in a bubble. Now, in a world where yardies love hip-hop, the album has potential to capture both local and international market as a brand that fuses the biggest music on the global stages," Rush said, adding that the album is his most proud musical accomplishment.