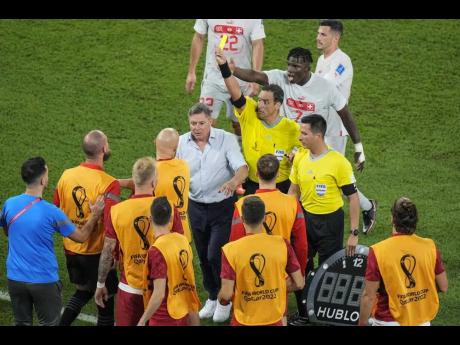 Referee Fernando Rapallini displays a yellow card to a Serbian player from the bench during the World Cup Group G football match against Switzerland, at the Stadium 974 in Doha, Qatar on Friday. Switzerland won 3-2.

FIFA brought disciplinary charges against Serbia yesterday for alleged misconduct by players and fans including offensive chants at a World Cup match against Switzerland.

Tensions flared in the stands and on the field in a rematch of their stormy game at the 2018 World Cup that revived ethnic Balkan rivalries.

Switzerland were captained by Granit Xhaka in Friday's match, and Xherdan Shaqiri scored the opening goal in a 3-2 win that eliminated Serbia. Both Swiss players have ethnic Albanian roots and family ties to Kosovo, which declared independence from Serbia in 2008. Serbia don't recognise Kosovo's sovereignty.

FIFA didn't specify which incidents at Stadium 974 led to charges relating to "misconduct of players and officials," discrimination.

Anti-Kosovo chants were heard from the section of Serbia fans, who targeted Shaqiri with verbal abuse in the first half.

Several Serbia players in the dugout encroached on the field in the second half when the referee didn't use video review to study a claim for a penalty kick.

FIFA, world football's governing body, gave no timetable for the disciplinary case. Any punishments could apply when Serbia next play competitive games in March in a European Championship qualifying group.