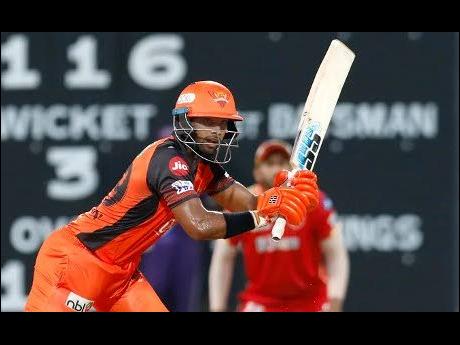 Asked to bat first in the final at the Sheikh Zayed Stadium, Gladiators gathered a challenging 128 for four from their 10 overs with South African all-rounder David Wiese top-scoring with an 18-ball unbeaten 43 and captain Pooran belting 40 not out off 23 balls.

In reply, Strikers slumped to 29 for four in the fourth over and never really recovered, eventually ending on 91 for five.

Skipper Pollard, who retired hurt in the eighth over with 56 runs required from 14 balls, top scored with 23 from 15 balls while Englishman Jordan Thompson weighed in with an unbeaten 22 from 17 deliveries.

West Indies left-arm spinner Akeal Hosein with two for 16, gave Strikers a strong start when he removed both openers Suresh Raina, who made seven and Tom Kohler-Cadmore, who contributed 11 but Pooran counter-attacked to lead Gladiators' revival.

The left-hander, who recently resigned as West Indies white-ball captain, struck five fours and a six as he added 29 for the third wicket with international teammate Andre Russell, who made nine and a further 74 for the fourth, with Wiese who lashed two fours and four sixes.

Pooran eventually fell to Pollard off the final ball of the innings, skying a catch to short fine leg.

Irish seamer Josh Little, who took two wickets for four runs and Pakistan pacer Mohammad Hasnain, with two for 14, then wrecked Strikers' top order before Pollard and Thompson tried to regroup in a fifth-wicket partnership.

By the time Pollard limped off after thumping a four and two sixes, the required run rate had climbed out of control, allowing Gladiators to comfortably close out the contest.

Pooran finished the tournament as the leading batsman with 345 runs at an average of 49.