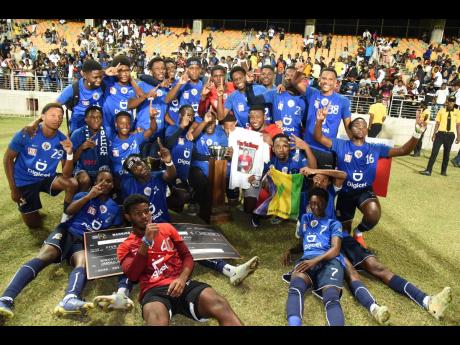 Jamaica College players celebrate with the ISSA/Digicel Manning Cup schoolboy football trophy after defeating St Andrew Technical High School (STATHS) 8-7 on penalties in the final on Friday night at Sabina Park. The scores were tied 1-1 at the end of regulation time.

Jamaica College (JC) describe the Manning Cup trophy as a "dear family member" and Friday night was the ideal reunion that the 'Dark Blues' longed for.

JC claimed their 31st hold on the ISSA/Digicel Manning Cup, outlasting St Andrew Technical High School (STATHS) 8-7 on penalties, after both played to a 1-1 draw in regulation time. The third meeting in five seasons between the two, ended like the previous two; from the spot with JC victorious.

For JC head coach Davion Ferguson, the mission was simple - regain that title that they believe is theirs. It was the task in his first season in 2019, after JC lost the title to Kingston College (KC) the previous year. The same situation manifested itself this season, after losing the final on penalties to KC in February.

"Last year when we lost to KC we knew exactly what the reason was. This year we plotted from the start to regain our crown. Last year we felt as if someone came in our house and took away one of our family member," Ferguson told STAR Sports. "The Manning Cup as our principal always says belongs to us, and we work hard every year to bring it back to Jamaica College and we are very happy that we could do that this year."

The team celebrated with the trophy yesterday morning at the school hall but Ferguson knew that the result could have easily been different, with STATHS having a chance to win the penalty shootout in the fifth round of the regulation five kicks.

The rivalry between the two schools, which has become the most anticipated each season, has not been by accident and he said that JC had to earn it from STATHS, who bring out the best in him and his players.

"I think based on STATHS being a competitor, a very worthy one, for the last five years at least, you can definitely say that they are worthy competitors. It is a team that I have a lot of respect for.

"Coach (Philip) Williams is someone that I am very close with, someone that I have a lot of respect for, but in the end I think our preparation, our character, our mental toughness helped us to pull through," Ferguson said.

Three seasons and two titles later under his guidance, JC's success continues to stand out with Ferguson claiming that this latest triumph is his finest hour.