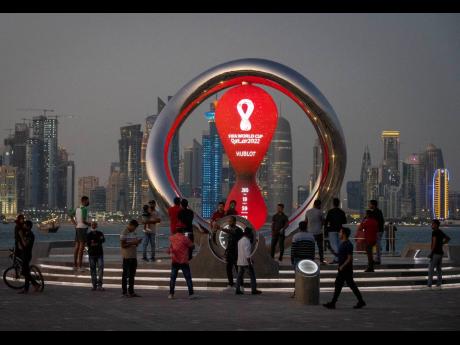 People gather around the official countdown clock showing remaining time until the kick-off of the World Cup 2022, in Doha, Qatar, in November. Fans going to the World Cup in Qatar must show a negative COVID-19 test when they arrive as part of the host nation’s rules to combat COVID-19, organisers said yesterday.

Fans going to the World Cup in Qatar must show a negative COVID-19 test when they arrive as part of the host nation's rules to combat COVID-19, organisers said yesterday.

All visitors aged 18 and over must also download a government-run phone application tracking people's movements and health status, called Ehteraz.

"A green Ehteraz (showing the user does not have a confirmed case of COVID-19) is required to enter any public closed indoor spaces," World Cup organisers said.

Visitors must be able to show a negative result from a PCR test taken in the 48 hours before arriving or from an official rapid test taken within 24 hours. The COVID-19 testing policy for visitors aged six and over is "regardless of the individual's vaccination status", the Supreme Committee for Delivery and Legacy said in a statement.

The decisions extend throughout the World Cup the public health policies that have been in place since September 4 for all travellers arriving in Qatar.

Vaccination is not mandatory for the 1.2 million expected visitors for the November 20-December 18 tournament. In June 2021, Qatar's government had suggested there would be a vaccine mandate for fans at the World Cup.

Rapid antigen tests taken in the previous 24 hours before landing in Qatar will only be accepted if they are from official medical centres and not self-administered. No further tests are required in Qatar if fans do not develop symptoms of COVID-19.

Masks must be worn on public transport, including the subway system that many fans will use to get to the eight stadiums in and around Doha.

Players and staff with the 32 World Cup teams will have to take rapid antigen tests every two days in Qatar, as will referees and match officials, FIFA said.

FIFA and the Qatari government "strongly advise all participants to be fully vaccinated against COVID-19", soccer's governing body said yesterday.

Qatar has recorded nearly 450,000 confirmed cases of COVID-19 and 682 deaths from the disease, according to data gathered since 2020 by Johns Hopkins University in the United States. Qatar has a population estimated to be at least 2.5 million, although only about 350,000 of those are Qatari citizens.

More than 97 per cent of the population in Qatar has had at least one dose of a COVID-19 vaccine, the data states.

"Anyone who tests positive for COVID-19 while in Qatar will be required to isolate in accordance with Ministry of Public Health guidelines," World Cup organisers said.

The 2022 World Cup will be held in full-capacity stadiums - with about three million tickets on sale for the 64 games - just 16 months after the European Championship was played across the continent with some stadiums only 25 per cent full because of local COVID-19 rules.