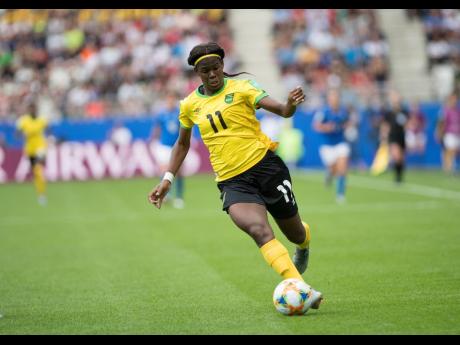 With a potential international return looming, national striker Khadija Shaw continued her consistent goal-scoring form for Manchester City as they defeated Everton 5-1 in their Continental Cup opening Group B game at the Manchester City Academy Stadium on Wednesday.

Shaw scored in the 32nd minute, her sixth goal in all competitions this year as City took the lead early in a group that features their-arch rivals Manchester United as well as Leicester City and Durham. Caroline Weir opened the scoring in the eighth minute while Lauren Hemp, Jess Park and Ellen White added second-half strikes in the 74th, 79th and 89th minutes, respectively.

After Everton's Grace Clinton managed to find the equaliser in the 10th minute. City retook the lead through Shaw who managed to help the attack, thanks to a formation change that saw White and Shaw together in attack. Shaw managed a strong header off the back post to score in back-to-back games for the first time this season.

Shaw could have also had a brace but her tame shot was saved by Courtney Brosnan before the half-time break.

She had previously scored her second Women's Super League goal of the season last Saturday in a 2-2 draw with Manchester United which saw City finish the game with 10 players.

Shaw's current form comes as the Reggae Girlz prepare for their international friendly against Costa Rica in 10 days time in Fort Lauderdale, Florida. She has not played an international fixture since February 2020 during the Olympic qualifiers and withdrew from the June international friendlies against Nigeria and World champions the United States. National senior men's head coach Hubert Busby Jr said that they will be inviting Shaw for the October window with the hope she will be able to join the prematch camp.

With a squad announcement looming, the Girlz are expected to report next Monday for a week-long camp prior to the game.