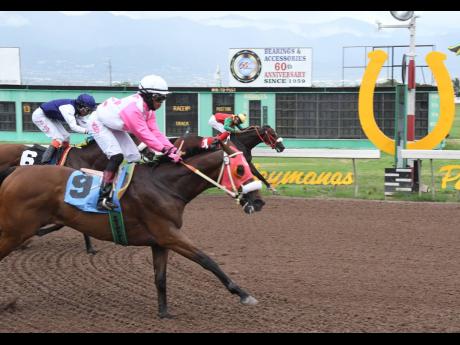 Having recorded her second straight victory in the saddle of the year, female jockey Abigail Able believes that she now has an outside shot of winning this year's jockey's championships.

Able will be aiming to achieve a feat that no other woman has been able to accomplish in the history of Caymanas Park.

Her two wins from three rides has put her into sixth place in the jockey's championships. She is now two wins behind leading rider and joint 2020 champion jockey Anthony Thomas.

" I will be trying to win it because no female has ever done this before and so I am going to try and go for it," said Able. "I am just hoping to get a lot of good rides and once this happens then you can look out for a female champion jockey," she said.

"I am feeling great about these two wins because I have been working really hard and so I am really grateful for these wins right now," Able said.

The former Waterford High School student added that she has worked very hard over the past two years to improve her craft and, therefore, she has been told by her peers that she is riding much better now.

"They have been telling me that I am looking much better in the saddle and so this has helped to boost my confidence a lot because I feel good about this," she said. Able underscored that once she remains focused and disciplined on the task ahead, then she is going to score a lot more wins.

"My target for this is to try and win as many races as possible and see where it takes me because I could even go on to win the jockey's championships quite easily," Able said. .

"I know that there is a lot of improvement that is needed, but I know once I continue to work hard then things will get better," she said.