Reggae Girl Schneider hailed as one for the future ... - after being drafted in NWSL 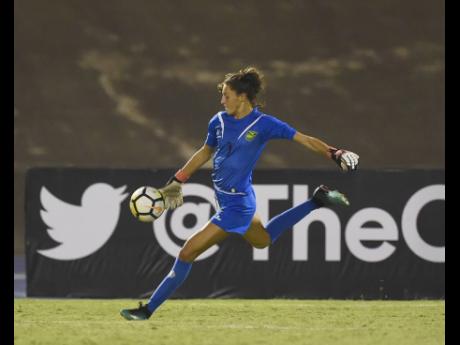 National goalkeeper Sydney Schneider, who became the latest Reggae Girl to join the National Women's Soccer League (NWSL), is being heralded as one for the future, according to former United States international Lori Lindsey.

The 21-year-old Schneider was selected by the Washington Spirit in the third round of the NWSL draft, having graduated recently from the University of North Carolina Wilmington (UNCW). She was not only the first of two goalkeepers selected in the draft but became the first player from the UNCW programme to be drafted to the NWSL.

Lindsey, during the online broadcast, said that she sees great potential in Schneider and believes that she will benefit from having current starting goalkeeper Aubrey Bledsoe to learn from.

"I think her ceiling is super high. She has World Cup experience. To get a goalkeeper of this calibre late in the third round, she might not be the best goalkeeper at this moment in this draft that was available, but I think it terms of a five-year plan, she has the highest ceiling," Lindsey said.

Speaking on the UNCW programme's website, her former college coach, Chris Neal, said that Schneider has earned the opportunity of playing at the professional level and is excited about her potential.

"She is so deserving of this chance. She is a great example that dreams can be realised in a UNCW Seahawk jersey. I speak for our entire team when I say we are elated and so excited to see what the future holds for her," Neal said.

While still at the UNCW, she started two games for the Reggae Girlz in their historic Women's World Cup campaign in 2019. That same year, she won the first Colonial Athletic Association (CAA) goalkeeper of the year award and has since been named to first-team All-CAA. She now joins a franchise that also drafted forward Trinity Rodman, daughter of basketball hall of famer Dennis Rodman, with the second overall pick in the first round of the draft.