Kelly shines with brace in USL 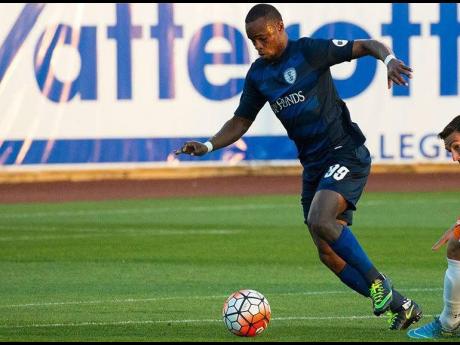 Jamaican Dane Kelly smashed a brace to take his season tally to 10 as Charlotte Independence stunned group leaders Birmingham Legion 3-1 on Saturday night to march to their third win on the trot in the United Soccer League.

In the top-of-the-table contest at the BBVA Field in Birmingham, which ended with both teams reduced to 10 men, Charlotte scored twice in the first half through the 29-year-old Kelly, to lay the platform for the crucial result in Group G.

While Charlotte remained second, they moved to within a point of Legion, who remained stuck on 22 points with their second defeat in three outings, having played one game more.

Kelly opened the scoring in the 17th minute when he collected a left-sided cross from Jake Areman inside the box, pivoted and curled a superb volley beyond the reach of goalkeeper Matt Van Oekel from eight yards out.

Another Jamaican, 29-year-old Nico Brett, then levelled for Birmingham with his seventh goal of the campaign when he finished off a clinical passing move from close range, giving custodian Brandon Miller little chance.

However, Kelly restored the advantage in the first minute of stoppage, splitting defenders to send a powerful header past Van Oekel, following another Areman cross.

Birmingham lost Anderson Asiedu in the 60th to a second yellow card, and their fortunes worsened when Derek Gebhard got Charlotte's third after being put through on the edge of the 15-yard box by Guido Vadala in the 86th.

Charlotte's victory was marred, however, when left back Joel Johnson was handed a second yellow card for a poor challenge in the final minute.

At Fifth Third Bank Stadium near Kennesaw, Georgia, 17-year-old Trinidad and Tobago youth international Ajani Fortune scored his first goal of the season, but Reggae Boy Romario Williams countered with his sixth to push Miami FC to a 2-1 victory over Atlanta United .

In a battle of the bottom teams in Group H, the visitors took the lead in the 20th minute through Williams, the 26-year-old slotting in a rebound from point-blank range after goalkeeper Ben Lundgaard managed to only parry a powerful freekick from Tomas Granitto.

Three minutes later, Fortune equalised for Atlanta, however, unleashing an instinctive 15-yard rocket after the ball fell to him fortuitously.

With the scores all square at the break, Miguel Gonzalez settled the game four minutes following the resumption with a low drive from just within the box.

Both teams have nine points and are already out of contention for a top-two finish.

Another Jamaican, Jason Johnson, also got on the scoresheet with his first goal of the season after coming off the bench in the 74th minute, netting deep in injury time at the end as hosts Louisville FC brushed aside Saint Louis FC 3-0 at Lynn Family Stadium.