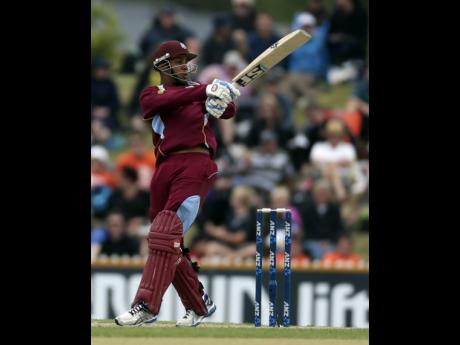 A blitzy unbeaten 91 from 40 balls from opener Lendl Simmons helped to guide the Windies to a comprehensive nine-wicket win over Ireland and level the three match Twenty20 International series at 1-1 in Basseterre, St Kitts.

Simmons hit five fours and 10 sixes in the Windies total of 140 for one in 11 overs, this after the home side had earlier restricted the visitors to 138 all out in 19 overs and a ball.

The right-handed Simmons shared in a 133-run opening stand with fellow opener Evin Lewis, who made a quick 46 from 25 balls with four fours and three sixes.

Earlier, The Irish batting collapsed after they got off to a good start, posting 50 runs in the first four overs. However, when Captain Kieron Pollard picked up the wicket of Kevin O'Brien for 36, things started to go downhill.

Pollard once again bowled superbly as he bagged three for 17 and Dwayne Bravo, three for 19, as the Irish batsmen fell at regular intervals. Captain Andrew Balbernie was the next best scorer with 28.

Man-of-the-match Simmons was grateful for the knock which saw his team over the line.

"It was a proper batting surface and I got the freedom to express myself and go hard in the power play," he said.

Losing captain Andrew Balbernie summed up what was a good series for his team.

"We were outclassed in all facets," he said. "When you lose wickets in clusters against a team like the West Indies, you've got no chance. We will take positives from drawing a series with West Indies and it was great exposure for some of the guys."