All square between Scorpions, Volcanoes 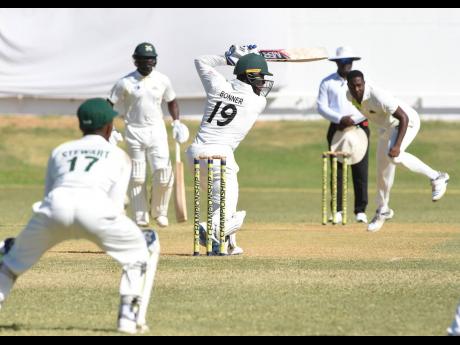 The Jamaica Scorpions and the Windward Islands Volcanoes played to an exciting draw in their Cricket West Indies Professional Cricket League Regional 4-Day Championship game which ended at Sabina Park in Kingston yesterday. Needing to score 238 in their second innings to win outright, the Volcanoes held on to reach 155 for five when both captains decided to call an early halt to the proceedings. Devon Smith top scored with 47, while Derval Green took three for 30.

Earlier in the day, the Scorpions, who resumed on 291 for three, managed 404 for eight declared, with Nkrumah Bonner making an even unbeaten 100. Scorpions head coach Andre Coley was pleased with the efforts of his batsmen in the second innings.

"We showed a lot of resilience after being asked to follow on," Coley said. "That was good. In fact, we were able to get ourselves in a position where we could declare and push for a win. That was good from a batting standpoint."

Volcanoes head coach, Andrew Richardson, was full of praises for both teams.

"It was a very good game," Richardson said. "We were basically in control for two days and Jamaica clawed their way back. They came back this morning and showed some fight - definitely put us under pressure for the last few hours. Our batting, however, stood up. It was an excellent game of cricket."

The Scorpions will next face Barbados Pride, starting on Thursday at Sabina Park.