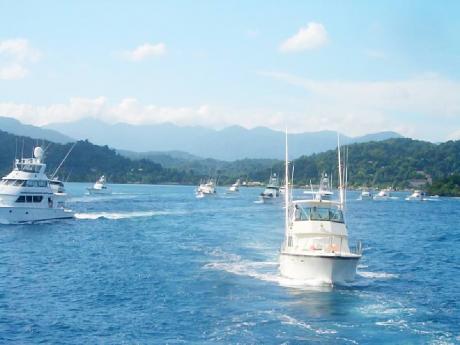 Boats sail out into the sea during the Port Antonio Blue Marlin tournament last year.

Approximately $21 million is up for grabs during the 3rd staging of the Superstars of Port Antonio Blue Marlin tournament, which is scheduled to begin on September 24 at the Errol Flynn Marina in Portland

The 2019 tournament has so far attracted 21 boats, which will see anglers competing over three gruelling days, while seeking to capitalize on the varied cash prizes, trophies, and other awards.

Chairman of Superstars of Port Antonio, Robert 'bobby' Stewart pointed out that it will be the largest cash payout in any angling tournament in Jamaica's history, as emphasis is placed on rewarding anglers, who are drawn locally and from overseas.

"This is history, real fishing history in the making," Stewart said.

He continued: "There will be a grand prize of $1million for the winner. There will also be a potential $US200,000 in cash and prizes including prizes for record fishing (largest marlin and other species). This is like $20 million Jamaican for this year Superstars tournament, which is separate from the main prize. It is also a record as it relates to prizes. We have three or four overseas entry, which are boats from Grand Cayman that will take part in the tournament."

The official opening ceremony of the Superstars of Port Antonio Blue Marlin tournament will be on September 24th with a cocktail party at the Errol Flynn Marina. Fishing will take place on the 25th, 26th, and also on the 27th of September. The prize giving and awards ceremony will also be held on the 27th following the final day of competition.

The tournament climaxes on the 28th of September with a beach party at the Errol Flynn bikini beach- featuring Trinidad Soca star, Shal Marshall, along with other surprise guest artistes.

Continuing Stewart said "This is going to be a memorable tournament, which could very well make us the envy of the Caribbean. For the first time in the history of fishing tournament in Jamaica (Portland), anglers will compete for attractive and lucrative prizes. I must thank emphatically our title sponsor, Mayberry Investments Limited, for their support and invaluable contribution."