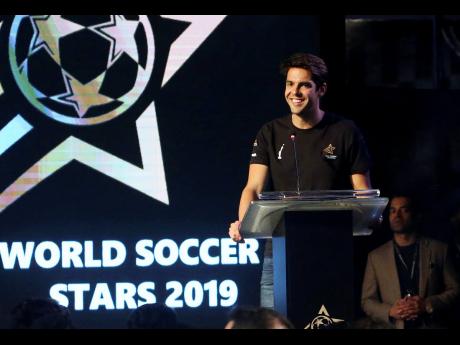 From lifting the World Cup to being named the world's best player, Kaka ascended the highs Neymar is still chasing.

So after more tumult in Neymar's career, Kaka has some advice for his fellow Brazilian:

Stay at Paris Saint-Germain to lead the pursuit of Champions League glory, and the World Player of the Year accolades will follow.

Keep on maturing and maybe the forward can win a World Cup to avoid being viewed as a failure for Brazil.

"Everybody wants to give some advice or an opinion about his life," Kaka said in an interview with The Associated Press. "He's just a 27-year-old guy, a lot of people of the same age make mistakes and improve with that."

But Kaka's opinions and advice could be worth listening to, even for Neymar.

After all, Kaka won the game's top individual honours in 2007 when he was named FIFA World Player of the Year and collected the Ballon d'Or after winning the Champions League with AC Milan.

Neymar, the world's most expensive player, is reeling from being jeered on his return to the PSG side last weekend after sitting out the opening four league games of the season as he pushed for a move back to Barcelona during the summer transfer window. He won't play in the Champions League until the third group-stage game because of a suspension.

"For him, I think it's good to stay there in PSG for now," Kaka said at the FIFA20 video game launch. "I think it's good for him, for the club. I think PSG is always trying to build a great team to win a Champions League, so he can be the leader for this project and in my opinion, it's good. It will be a great year for him."