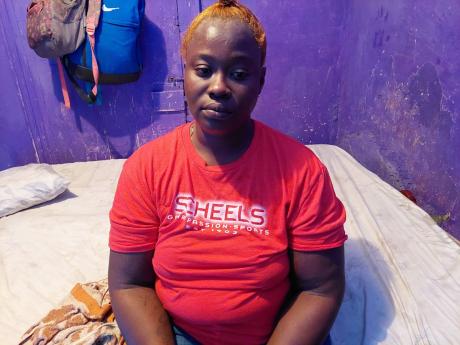 Single mother Delesa Henry said that she is looking for assistance to have her own stall, so that she can generate an income to better care for her five children.

A fountain of tears flooded Delesa Henry's dark and cramped one-room dwelling that she occupies in downtown Kingston with her five children.

The 30-year-old, who dropped out of all-age school after she became pregnant at age 14, has had a hard time taking care of her children. The lone bed is hardly big enough to fit all six of them. Equally distressing is that the two youngest children have not been attending school, though she tries to school them at home. The other three are enrolled in educational institutions, but Henry finds it difficult to send them.

"Sometimes mi nuh have anything to give them but, because dem love school, mi still send them," she said of the children, ages 15, 13 and 10.

"The seven- and three-year-olds supposed to a go school already, but mi nuh start dem off yet. Mi did have the money for the registration but mi nuh have the school fee money, which is $8,000. Plus there was a birth certificate issue. Mi get dem now but correction need to make on it, but mi would send dem same way if mi get the help," she added.

Henry has plans of becoming a successful chef but, in addition to being a teen mother, she suffered a major setback when her mother, Sandra Burke, was murdered seven years ago. At the time, Henry was working as a bartender. Yesterday as she watched a woman giving counselling sessions to a teenage girl, she said she wished she had benefited from such guidance.

"Pregnancy change mi a lot enuh and mi don't know how mi go back [to have other children]. Mi never have dem guidance deh, so mi just did young and a freelance," she said. Henry told THE STAR that she is not blaming her late mother for her circumstances, but she wished she had treated her better.

"Mi mother wasn't a working type of person. She was a street person who used to go out there and make money. She was the only adult in the household but she was hardly there, and mi have to be guiding my brother. Sometimes things will happen in the house and mi did have to go way. So mi deh all over inna di place. She use to love throw mi out and mi deh pon di road with mi pickney. So mi did just get fed up one day and tell myself say mi nah go back inna her house and face any more ill-treatment," Henry said. Now, Henry is praying for assistance from a Good Samaritan.

"Mi have a little stall but mi nuh have any goods. So if mi could get anyone to give me a small start, mi would appreciate it," she said. "Nutten nah gwan from wah day because mi a try get work and nah work. Mi use to do bar work but it never work out, and, because of the violence weh a gwan, mi have to stop."

With no source of income, the family sometimes depends on meals from the Marie Atkins Night Shelter, which is located across from her home. She, however, stated that her children are sometimes embarrassed to visit the shelter.

"Sometimes people in the community criticise mi. Yea, mi understand say mi get pregnant at a certain age and mi go back again, but only God know why it happen. But it stop now," the sobbing mother said. She said she does not plan to add any more children to her family as providing for five mouths is extremely challenging without a job. She said that only one of the children's fathers is making a contribution. Another father is dead, one is behind bars, and she is trying to get the other to pay child support.

She offered words of encouragement to teenage girls in the hope they will avoid her situation.

"Just stay inna school and try get something inna your head because, once you get it, it cannot come out. If mi did have dem guidance deh, God know mi woulda better off right now," she said.