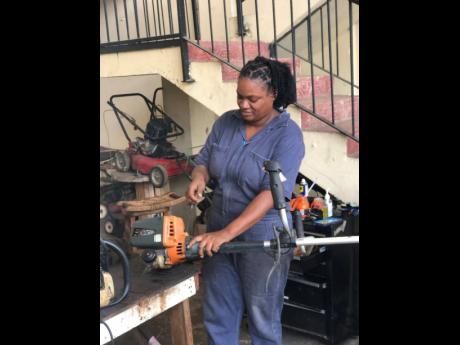 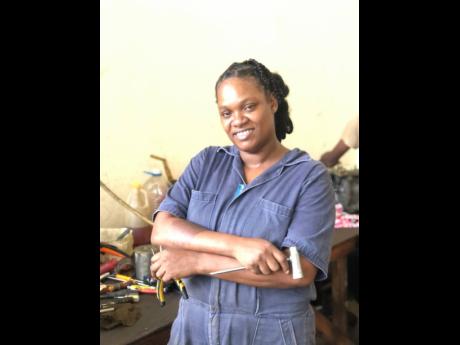 Wisdom in her workshop in St Catherine.
1
2

Rushel Wisdom considers herself the typical country girl who was always seeking her next adventurous quest, whether it was climbing trees or riding a bicycle just like the boys.

"I was a tomboy and life was easy, it was nice. I did everything, ride donkey, go pipe, I did everything with the boys. I wasn't into the girly stuff," she shared with THE STAR.

So it comes as no surprise then that several decades later, after she relocated from Middle Quarters, St Elizabeth, that Wisdom is operating her own small engine repair and service centre in St Catherine where she fixes various small engine machines including weed whackers, chainsaws, generators and lawn mowers.

Initially, she had hopes of becoming a nurse and model, but later sought a career that was more fulfilling than working as a secretary at a repair shop.

"It was boring and I was writing bills, answering the phone and it was nothing to drive me. I even asked God if a this me a go sit down and do for the rest of my life. I was frustrated with the secretarial work. I told God that I wanted to do something and when I do it, they will know me and they will come to me. God was showing me something but it's like I wasn't seeing it. I decided that I was going to buy some tools, not knowing that I was going to fix stuff,"said Wisdom, who graduated from Holy Trinity High School in Kingston.

The mother of three joked that although she bought her own toolkit, she was a bit hesitant to begin doing repairs. Eventually she single-handedly dismantled a weed whacker. Her grin broadened as she recalled how she spent hours "pulling it down and putting it back together" until she perfected her craft.

Having garnered 10 years' worth of on the job experience, Wisdom said that satisfying customers keeps her motivated. She dubs herself a 'doctor', as she is able to properly diagnose and remedy any issue. And she wasted no time in proving her skills to THE STAR team.

"If a gentleman brings in this weed whacker and say it nah start, first I will try to start it and hear what it sounds like, and based on how it sounds. I can differentiate whether it is the carburettor or the spark plug or the coil not firing enough. Right now it's the carburettor kit not functioning any at all, and when I say that, the kit is crystallised," the technician explained.

Carefully she checked the spark plugs, then poured gas into the machine. In less than 20 minutes, she aggressively started the weed whacker, that echoed a powerful rev. Wisdom said that it is her knowledge of mechanics, being open-minded and willing to learn, and having a keen eye for detail that makes her fit for the job.

"I love the finish and the customers love the finish too. My aim is making it [the machine] start the way how they want it. My motivation comes from God and I am doing something that I love, knowing that I am providing for myself and others. I love everything about it, the grease doesn't bother me," she said.

Wisdom added that she is not fazed by the stares that she receives from customers, who are stunned by a woman in a repair shop. In fact, she works harder to prove her naysayers wrong.

"I implore young people to have a skill because for me, nobody can take that away from you," the 36-year-old stressed.

Wisdom hopes to expand her business and become certified in small engine repairs.