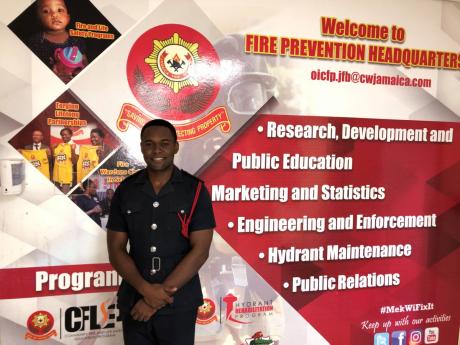 It took only a nudge from a friend 19 years ago to catapult Jay Scott into his current role as district officer and acting assistant superintendent for the Fire Prevention Unit within the Jamaica Fire Brigade (JFB).

It is a position he holds with great pride, as he is dedicated to the mission of spreading public education about fire prevention and safety and debunking myths about the JFB.

"A lot of persons don't even know that there is a fire prevention division. Most persons are not aware that we do more than fight fires. The reality is when you hear about firefighting, you think about red truck, flashing lights, pulling a hose. You don't think about someone doing a fire inspection. You don't think about someone doing a building plan review to make sure that the place you're going to live in is safe for you to occupy," Scott said.

The Seaforth, St Thomas, native holds firm to the adage that 'prevention is better than cure', as it is the unit's aim to ensure that lives and property are secured. In light of Fire and Life Safety Awareness Week, he told THE STAR that his job brings him great fulfilment.

"When you interact with the public, and during that interaction people acknowledge that a the first dem a hear them something there about fire brigade, you can say to yourself 'Weh me a do make sense', because there is another group of persons who never did know this and a lot of the information shared, is information that can save people's lives. If we can teach persons some skill that can save their lives, that is something that I consider important. Being able to positively impact people is fulfilling for me," the father of two shared.

His career in the JFB started in 2003, a year after he completed secondary education at Morant Bay High School. Scott indicated that he was fixed on becoming a doctor but disliked the years of studies that it required. He thought of joining the army, based on his involvement in the cadet unit and The Scout Association of Jamaica.

But in 2003, he accompanied a friend who was seeking a career as a firefighter. Scott, 37, emerged as that year's best recruit and was awarded for best academic performance.

"Training was very hectic, very demanding physically and mentally. Firefighting is very strenuous, so training prepares you for that because the gear ... is very heavy. Over time, I fell in love with it, to be honest. I took training as fun and it was a good option at the time," Scott told the news team.

After training, he was stationed in Morant Bay for nine years and joked that his first fire call was somewhat anti-climactic, as it was a light pole that was ablaze. Regardless, Scott, the officer in charge of research development and public education for the Fire Prevention Headquarters, was not deterred.

"It was not the most exciting but I was nervous because it was my first fire call. Hearing the bell ring, it gives you that adrenaline rush. When you hear the bell ring, you know you have one minute to be in the truck. The truck must leave the station in a minute. That, in and of itself, gives you the nerves," he said.

In 2012, he took the conscious decision to broaden his horizon by applying to the Fire Prevention Unit and has fallen in love since then. He said that his aim is to one day become JFB commissioner. He is currently completing a bachelor's of science degree in occupational health and safety at the University of Technology Jamaica.