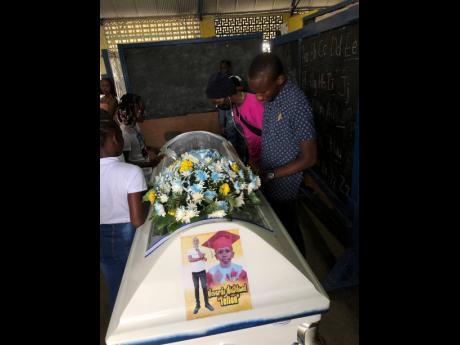 Mourners look at the body of Nevardo Mateland at his funeral yesterday in Trench Town. 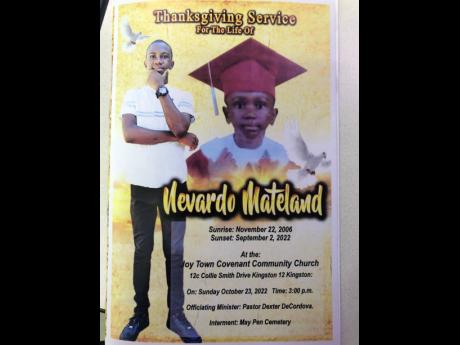 A copy of the funeral programme. 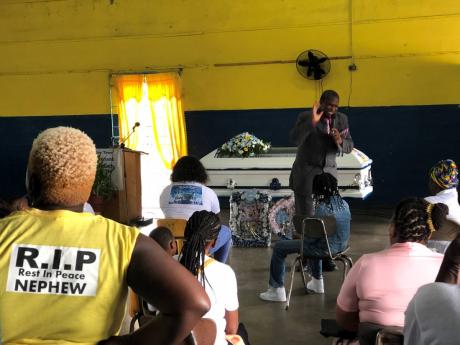 The grief was palpable among mourners who gathered at the Joy Town Covenant Community Church in Trench Town on Sunday, paying their last respects to slain teen Nevardo Mateland.

Some who were too distraught to view his body in the casket, looked dazed by the unfathomable reality that their friend and beloved relative was now deceased. Nevardo's mother, Kenesha Smith, struggled through tears as she reflected on her first born, whom she deemed a humble and loving soul.

"If me never sure 'bout nobody else, me sure 'bout his love. In a August, me lie down pon me bed, me, him and the other two small children, and we in deh a play a game, a laugh and a chat. Me look pon him and say to him say 'Teflon, if nobody else nuh go college, you affi go cause yah me first child'. Him did want be a actor or a footballer," Smith told THE STAR.

The mother of four reminisced that on the fateful day, September 2, Nevardo called her, enquiring about her well-being. But she found his question puzzling.

"Him call me and say 'Mommy, yuh alright? And me say 'yes me deh a work.' Him say 'make sure, enuh, Mommy' and hang up the phone. So me call him back because me never like how it sound. Me say 'Teflon, how dat sound so? Me nuh like how it sound. Make sure say yuh nuh gone mix up inna nothing wid nuh body, enuh, yute'. And him say 'No, Mommy yuh mad? Me just want know say yuh alright, me nuh do nothing bad.' Me say 'Love you' and him say 'Love you too'," the grieving mother revealed.

But hours later, she was awakened by a distressing call.

Police reports are that Nevardo was sitting on Fourth Street in Trench Town when a lone gunman walked up and opened gunfire, hitting him in the head.

For Nevardo's father, Eldin, he was looking forward to his son starting grade 10 at Tivoli Gardens High School, and ultimately becoming a footballer. He shared that he started making plans for Nevardo's 16th birthday on November 22; the plan was to treat him to a nice dinner.

"Me did have whole heap a plans. Me just did want treat him like how a father supposed to treat him son or better than how my father treat me. A my first son and my first child, me just did want carry him out and make him feel good. Now me a plan say me affi go down a the cemetery [May Pen Cemetery] and fix up him tomb," Eldin told the news team.

Mourners were charged by officiating minister Pastor Dexter DeCordova to pray over their children.

"I am tired of it [reports of children dying]. Parents you need to pray because the enemy is after our children. Don't take it lightly. The enemy come to steal, kill and to destroy. We need to cry out to God, that enough is enough! Talk to God, tell him to protect my child," the pastor implored.