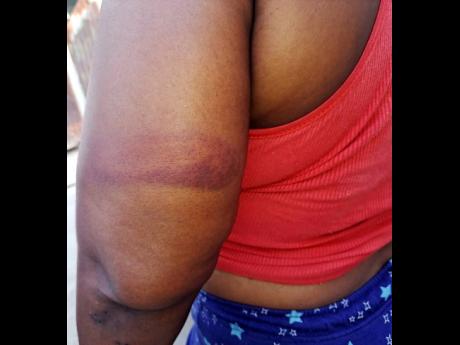 Joan (not her real name) shows off a bruise to her arm that she said she received from cops who assaulted her as she was heading to her home on Sunday.

A mother and daughter are accusing the police of assaulting them on Sunday in the Kingston Central area.

According to Joan*, the police were conducting operations when residents, who were gathered on the roadway, were instructed to return to their homes.

"The one wid the pepper spray say, 'Di whole a unnu gah unnu yaad'. So me a step off and a guh my yard now and di next one just come and start push me, 'Guh up deh so, guh up deh so!' Me say 'Offica, me don't live up there so, me live down the road.' Him start push and a drape up, and a suh me flash him off and him flash out him baton and slap me pon me hand," Joan said. She added that another lawman then pepper sprayed her in her eyes. Joan's teenage daughter intervened and was left with injuries to her shoulder, toe and forehead. The teen's face was also swollen.

"Me mada a come down the road and him [the policeman] a push her and a lick her. Me deh down a me yard a look and see him a push her so me walk go up deh. A bere head lick me get," the teen said. The alleged incident was captured on amateur video.

Joan has been charged with assaulting a policeman and is to appear in the Kingston and St Andrew Parish Court on November 21. The family is seeking to have the matter thoroughly investigated by the Independent Commission of Investigations and the Office of the Public Defender.

Superintendent Beresford Williams, head of the Kingston Central police, said police were protecting the scene of a shooting when residents arrived and started hurling abuse at them. "Residents started taking up items from the scene and instructions were given and those instructions were not followed, resulting in which force had to be used to bring the situation under control," Williams said.

Williams declined to comment on the alleged treatment that the mother and daughter received.

"In every incident where force is used, internal administrative review is done to examine the force that was used, if it was reasonable and to make recommendations as to what is being done," he added.