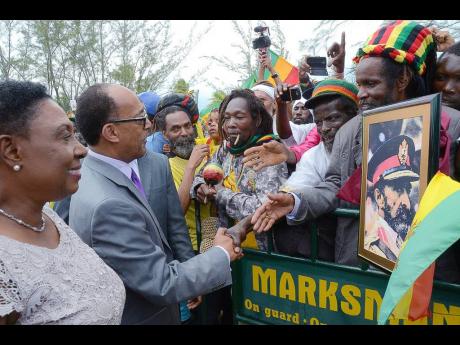 Culture Minister Olivia Grange (left), and Prince Ermias Sahle-Selassie greet Rastafarians on the occasion of the 50th Anniversary of the State Visit to Jamaica of Emperor Haile Selassie I of Ethiopia. 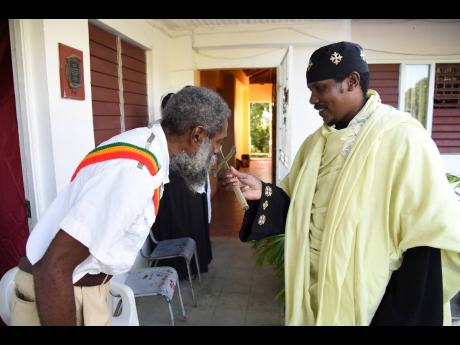 Haile Micka’el Cujo (left) bows and kisses the cross, which is being held by Abba Geereyesus Negat at the Ethiopian Orthodox Church Tewahado Church on Maxfield Avenue in Kingston yesterday.
1
2

President of the Crown Council of Ethiopia, His Imperial Highness, Prince Ermias Sahle Selassie, will arrive on the island on October 13, for a week of official engagements. Haile Selassie, the former Emperor of Ethiopia, visited Jamaica in 1966. This is the second visit by Prince Ermias, having arrived in Jamaica in 2016 to commemorate the 50th anniversary of his grandfather's visit.

"I think it is important, historically, for the Crown Prince to visit the church to show that there is a connection between the Ethiopian Orthodox Church and the royal family," said Emahoy Hannah Maryam Teklehaimot.

She said that Haile Selassie "was a very strict Christian" who believed in God. She said that contrary to popular belief, the Holy Trinity Ethiopian Orthodox Tewahedo is a Christain church.

"Rastas thinks he [Emperor Haile Selassie] belongs to them, so it is very important that the Crown Prince comes to church just as his grandfather did," added Teklehaimot.

She said that the church was "sent here to show Rastafarians how to worship the way how he [Emperor Haile Selassie] worshipped, and not the other way around".

The leaders of the Holy Trinity Ethiopian Orthodox Tewahedo Church shared that they have planned a special service in honour of the Crown Prince's arrival. Chief among the planned activities is the special Holy Communion.

Abba Geereyesus Negat, the administrator of the Ethiopian Orthodox Church in the Latin America and the Caribbean, a position he has held for the past 10 years, told THE STAR that he is looking forward to welcome the Crown Prince to his congregation.

"When the Crown Prince arrives, he will come to this church, this is his church. He is God's anointed. He is not just a friend -- the Church and the Prince -- they go together, that is the connection. This visit is sacramental and that is why we are doing communion," he shared.

Before the Crown Prince enters the temple, he is expected to bow before a cross that Negat holds in his right hand, and then kiss the powerful Christian symbol. This is standard practice for anyone seeking to enter the church.

Negat told THE STAR that while the church, like Rastafarians, use the colours red, gold and green, they do not regard Selassie I as God.