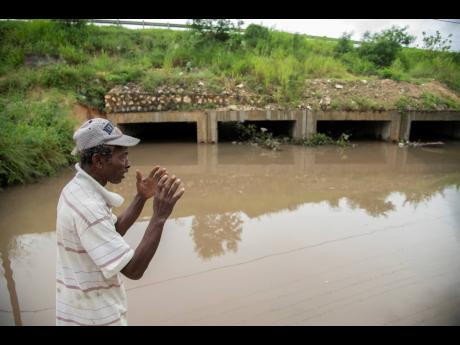 Calvin, a frustrated resident of New Haven in St Andrew, wants stiff penalties for persons who dump debris in gullies and rivers. 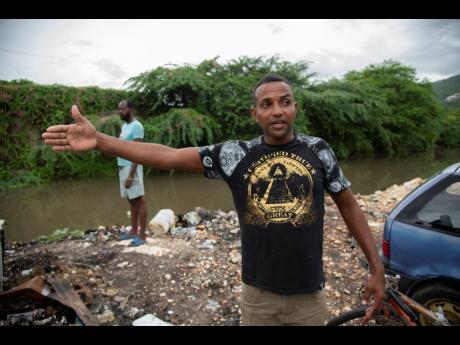 Winston Hennie, one of the men who laboured in the Duhaney River on Saturday to remove a debris from a culvert to unclog the drain.
1
2

Having spent hours clearing the debris-filled Duhaney River on Saturday, residents of New Haven in St Andrew went to bed confident that they would be spared from the usual flood that occurs whenever the river breaks its banks.

And they were right. Despite heavy and persistent rainfall from Saturday night into much of yesterday, members of the flood-prone community remained dry. The story, however, could have been much different as they woke up and found trunks and branches of a guinep tree, which was recently cut down, and an old sofa blocking the mouth of a nearby culvert.

The Duhaney River flows under the Mandela Highway, via a box culvert, and empties into the sea. However, during periods of heavy rainfall the river often breaks its banks and enter New Haven -- located on the edge of the highway -- due mainly to debris blocking the mouth of the culvert.

Calvin, who along with Winston Hennie and four other men cleared the river on Saturday, was furious.

"They need to pay for this, they should go to jail! Me vex man, because it took us a lot to clean it," Calvin said.

"No man, nobody nuh care, a that me see. Something need fi be done," he continued.

Calvin told THE STAR that a six-man team removed debris such as trees, old mattresses, fridges and couch from the river, thus making it possible for floodwaters to be unimpeded as it flows under the culvert to the sea. Hennie, 36, is one of the community heroes. He recounted that they decided to undertake the painstaking and rather unpleasant task of immersing themselves in the neck-deep murky waters to save their community from flooding.

Using a makeshift raft and armed with their machete, the men spent in excess of three hours to clear the debris. Not surprisingly, having seen more garbage in the river yesterday, he is calling for stiffer penalties to imposed on persons who choose to dump their garbage in gullies, which inadvertently causes problems in their backyards. He was very upset to see the old sofa and the downed tree blocking up the mouth of the culvert.

"Him coulda chop the tree and make a truck carry it away. This thing affect everybody and to know say the way how I did stay yesterday, and we clean it out, and by time we come back the day after, a the same thing happen," Hennie lamented.

At present, persons found dumping garbage in a public place may be fined a maximum of $10,000.