Javanghni Dennis living his dream after ditching the classroom 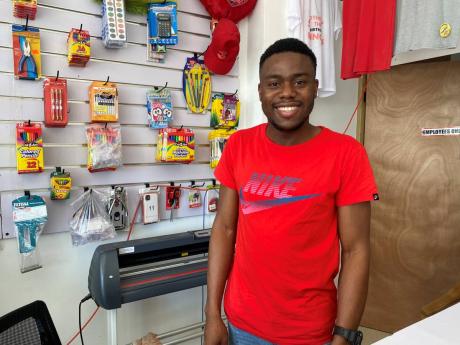 Javanghni Dennis' peers thought he had hit his head when, after graduating from Bethlehem Moravian College as a trained teacher, he applied to work in an Internet cafe instead of heading to the classroom.

With a laugh, he shared with THE STAR that back then his decision was not considered funny, as many who asked him to print material and do other odd jobs were amazed at his decision.

"They would say, 'Dennis, you really train as a teacher and come in here to work?'" he shared, adding that he got used to it. But Dennis had a particular philosophy.

"I am here today, but tomorrow I won't. You have to start from somewhere in order to reach your goal," he said. Dennis' goal was to own and operate his own business. And he has done so, with the establishment of Dennis Egg Farm in his community of Stanmore, St Elizabeth, less than a year ago. He credits his stepfather and his mother for helping him to make the venture a reality. He has also added an apiary and now sells honey.

But before all of these entrepreneurial endeavours manifested, he started working at G-mar Visuals in Black River, St Elizabeth. While there, he got the experience, knowledge and skills to own and operate his own Internet cafe. Dennis, who expressed strong faith in the Lord, said he had always prayed about whatever move he was going to make and has never regretted it. After leaving Maggotty High School, he worked at St Alban's Primary and Infant School as a clerical assistant. Two years later he was asked to drive the school bus, while still doing his clerical job.

"I was expecting to get certain things. I did not get it, so I resigned and went back to doing some farming with my mother, who I resided with at the time," he shared. Following a death in the family, his father encouraged him to pursue further education, which he did at Bethel.

"That in itself was another testimony, as when I applied I only had $500 in my name," he said. Of his teachers' college journey, he only said that despite hard economic situations, God made a way for him to finance his studies. But when COVID-19 hit, the G-mar Visuals outlet where he worked closed temporarily. However, he was still asked to help out at another branch. During that span, he met the love of his life and got married. She encouraged him to go back to school, which he did. He is pursuing a master's degree in English language at The University of the West Indies.

"Being in the business world and having your qualification, you sometimes have to put that aside and try to learn all the things you can," he said. Over a year ago, Dennis "walked into his destiny" as, while speaking with a friend who owned a clothing brand, they created Reggae Blend Internet Cafe, which is located in Santa Cruz.

"Reggae Blend is a clothing brand overseas, with customers directed to the cafe to have the textile printing carried out," Dennis explained. Although they have a harmonious relationship, Dennis said he wanted a business of his own and after praying about it, eggs popped into his vision. That's how Dennis Egg Farm was founded.

And the entrepreneur is not through, as he said that very soon he will be going into the distribution of skincare products as he teams with a manufacturer who won his confidence after he tried her products and saw that it actually worked.

Looking back, Dennis said that he is happy about the direction his life has taken and credits it all to ignoring naysayers, having a close relationship with the Lord, and trusting Him with every step.