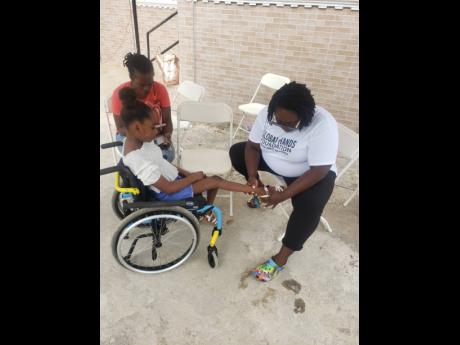 When Charleen Coates of charity organisation Global Hands Foundation read about paralysed nine-year-old Tamara Noble in THE STAR on July 28, she felt that she had to do something.

"When I read her story it touched my heart. I said to my fellow members, 'Here is an opportunity for us to help.' They were all touched and immediately agreed," said Coates, who is a Jamaican living in the US.

In 2017, Tamara, who is a student at Hague Primary School in Trelawny, was on her way to school when she was involved in an accident which left her paralysed from the waist down. To help her live a life that is as normal as possible, she needs a $800,000 brace. Her story was published close to the time when Global Hands Foundation, which has representatives in the US and Jamaica, was planning its third visit to Jamaica. The entity organised a health and wellness fair in Bounty Hall, also in Trelawny, last Thursday.

"On this trip we have doctors, nurses, psychological and occupational therapists who all volunteered to give service to the people," Coates revealed. According to Coates, since being touched by Tamara's story and seeing her needs, plans have been put in place to help the child, who she dubbed 'the Foundation Adoptee'.

The healthcare professionals who were gathered in the New Testament Church of God in Bounty Hall brought gifts, including wheelchairs, walkers, adult and children's diapers, as well as school supplies. Tamara received a wheelchair. Her mother Stacy-Ann Reeves-Noble, through tears, thanked all who have come to offer help to her daughter.

"Calls have come in from people of all walks of life and I am eternally grateful. On Tuesday she will be on Television Jamaica's Smile Jamaica. She plans to display her contortionist skills which she has developed. God is a good God. He is using my little diamond to show how great he is. The accident was bad, but out of it has come some good," she said.

Tamara, who spoke openly about her situation, said that she wants to be a paediatrician and to wave Jamaica's flag as she represents the country as a Paralympian.

"Some feeling is coming back into the leg. If you rub it there is no feeling, but when you tap it I can feel the tap," she said.