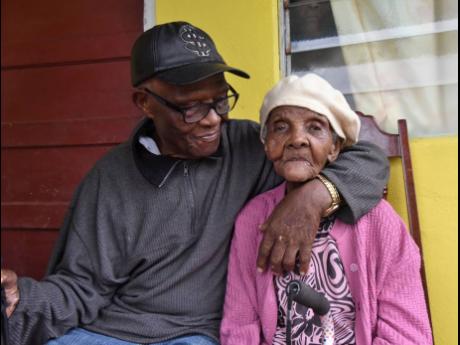 Naomi Richards-Tucker (right), shares a moment with her brother Edmond Richards at her home in St Catherine. 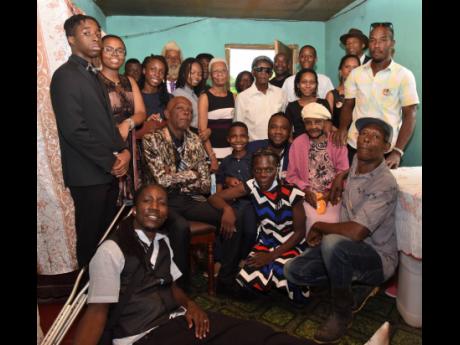 Centenarian Naomi Richards-Tucker is surrounded by relatives and loved ones. 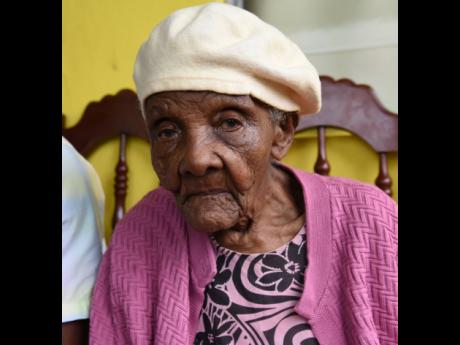 Even at 102, Naomi Richards-Tucker still remembers a time when donkeys, mules and other animals were the only mode of transport in the Lime Hall, Guy's Hill, area of St Catherine.

Recently when the news team visited her North East St Catherine district, relatives, friends and well-wishers were gathered, giving glowing testimonies of the centenarian, who is affectionately called 'Miss Cookie'.

"Mi born February 7, 1920, mi a 102 years old. Mi used to go a di Weslyan school (now a primary school). Dem time deh a barefoot mi affi wear, as a ongle big shot coulda afford shoes," Richards-Tucker said. She said that as a result of her struggle in school, she ensured all her children wore shoes to school.

Richards-Tucker was one of 10 children born in the farming community to Miriam Richards and Jacky Richards. She has nine children, 35 grandchildren and 28 great-grandchildren, plus a host of other relatives. Richards-Tucker outlived her husband Winston Tucker, who died in 1996. Her sister Lillian Richards, who was buried this year, also made it to 100. One of her grandsons, Lawrence Green, could attest to his grandmother's memory remaining sharp.

"I remember going next door and I broke a lady's lamp shade and tried to hide it. But she found out as I tried to replace it with hers," he said. "Even recently she told me, 'I remember when yu bruk di woman lamp shade'," he laughed. As she stared at her grandson with a broad smile, she acknowledged the incident.

"Yes mi remember, as a mi grow yuh and yuh did try fi replace the lamp shade with mine," Richards-Tucker said. Asked what types of food she loves, the witty centenarian gave all a bellyful of laughter with her response.

"Mi nuh really love food, mi just eat whatever mi get. But mi really love fi drink a Pepsi as I really love di taste," she said. Richards-Tucker was a vendor until 2007 when she retired.

Another grandson, Ronald Reynolds, said his grandmother is a very kind, loving, caring and hard-working individual.

"I always look out each evening when she return with the bulla for me," Reynolds said. "I watched her go to market in Ocho Rios from Thursday to Saturday and sometimes she would go to Linstead Market. Nothing could stop her." Persons told the news team that that the rigours of her work did not stop her from making her family happy.

"She is a wonderful person. She don't need glasses to see, she will cook and wash if you give her the chance," Carolyn Richards, a niece, said. "I have admired how she would carry the basket on her head. I have watched and admired her dedication to the sound upbringing of her children. The community loves her dearly."

Richards-Tucker's brother, Edmond Richards, said that she is a true champion who lives an exemplary life.

"I am the last of 10 children. I watched my sister worked very hard to take care of her family," he said. "Although she was married and her husband tried, she was always working hard. I marvel that despite her age it seems she is in good health to outlive many."