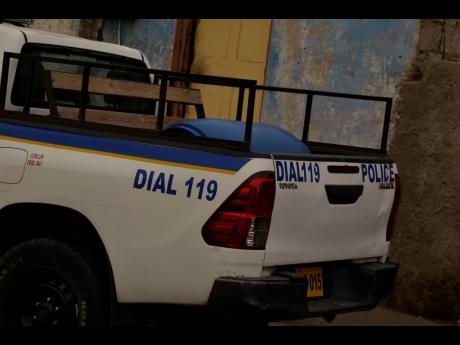 Jacqueline is now left to raise three children on her own after her husband, Marlon Madourie, was shot and killed during a drive-by in Bedrock, St Andrew.

According to police, he was not the intended target. The 41-year-old landscaper was riding his bicycle to work when he was hit in the chest by a stray bullet. He collapsed and was run over by a motor car as the shooters escaped. Jacqueline said that her husband of 15 years was "hard-working" and did not deserve such a horrible death. She said that Madourie always kept to himself and was never involved in any wrongdoing.

"He is a good man and a one thing mi know fi sure, him no trouble people. When mi hear say a gunshot him get, mi say to miself say a muss wrong place him deh cause him a coward," she said. Jacqueline shared that she was at work when she got the news.

"A relative text mi this morning (yesterday) and a ask mi if mi watch weh gwan pon di news. Me text her back to say a long time mi no watch the news feed cause mi tired of it. Mi never know a mi husband death mi would a talk bout hours after," she said.

"It is very, very preliminary but there seems to be a gang conflict in which a certain member of his family is involved and as such, he may have been targeted in lieu of that member of the family [who] they can't find. He was shot and injured last year in an attempt to murder him because of the same situation. However, [we] don't have information of him being directly involved in any gang conflict," Ricketts said. According to Ricketts, 49 of the more than 70 gangs in the division are active.