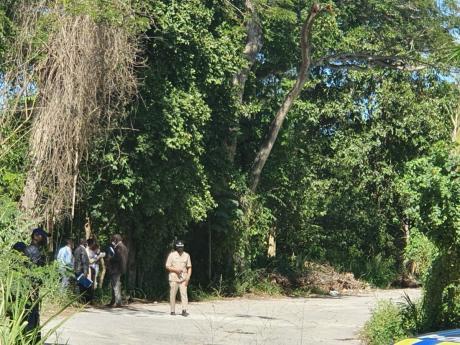 Police investigators at the scene where the body of a nine-year-old boy was found in St James on January 13, 2022.

A nine-year-old boy was found dead this afternoon in an abandoned vehicle along the Fairfield main road in St James.

The boy and his mother were earlier the victims of a carjacking.

It is reported that about 9:00 a.m. the mother and her son were travelling in her Audi motor vehicle from the direction of Tucker towards downtown Montego Bay.

It is further reported that on reaching a section of the roadway, in the vicinity of a service station, the woman slowed down to negotiation potholes, and while doing so, two men approached the vehicle and hit her in the face.

She was reportedly forced from the vehicle, which was driven away by her attackers with her son still inside.

The woman later made a report to the police, which launched a search.

The vehicle was discovered abandoned along the Fairfield main road and the body of her son found.

His throat was reportedly slashed.

His mother had to be taken to hospital.