‘Combo party’ organisers say they are not prostitutes 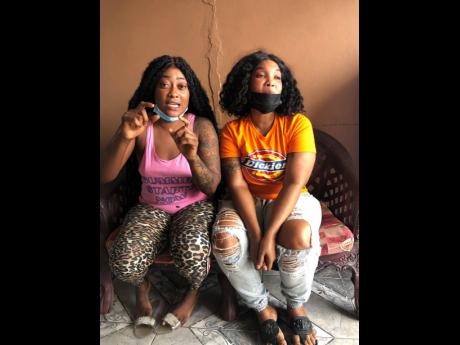 Shanice ‘Combo Boss’ Wilson (left) and Kedesha Lewis insist that the sex acts talked about in the video were merely to help boost attendance at the event.

Two women whose video promoting a party that promised sexual acts went viral are insisting that they would never sell sex.

Shanice 'Combo Boss' Wilson and her friend Kedesha Lewis say they were bored on a Sunday during one of the weekend lockdowns and uploaded the video of Wilson inviting patrons to the event, promising oral sex and full intercourse at various prices, including a combo deal for $5,000. Social media has been flooded with various memes and videos of persons saying that they were heading to the event in Waterford, St Catherine. But despite their new-found fame, the video has caused some distress and Wilson was even taken in by police.

"Mi a wonder who could a take down the video so fast and put it out and it cause a big uproar. It was a real mess because my parents and hers started to ask us what kinda ting that we a promote and it nuh sound good. It did hurt we at first," Lewis said. Wilson, 28, said that although she tried to explain that she was not partaking in prostitution and was not a part of the 'combo deal', the comments from some members of the public remained negative.

"Persons were saying that I was selling myself cheap and dem just a tear dung mi name. It was supposed to be Kedesha's party but she said she wasn't going to bother keep it but last week Friday, mi say mi ago keep da party ya because it was mi who go viral so mi start broadcast it more and it start go worldwide again," she said. Wilson insists that the sex acts spoken about were never going to happen at the event.

"Mi just do that so people can come out because people ago excited to know what it was about. If mi did say mi a keep a regular party, mi wouldn't get di support yesterday (Sunday)," she said. "I am a bartender and Kedesha do rental vehicles and she sell clothes and household items. We are not prostitutes and we do not sell sex."

Wilson said that while she was prepping for the party, the police came and took her to the Greater Portmore Police Station where they cautioned her against hosting the event. She said the lawmen told her that they were trying to protect her and Lewis and that the event would be a breach of the Disaster Risk Management Act.

"The policeman say dis party cannot keep and dem let mi go about 6 o'clock. Him say mi must take up mi liquor and go home and mi say okay but when mi inna di car, mi say mi money really a go down the drain because mi already pay for the venue, sound and other things. A mi one and mi son birthday a come up suh mi never like the idea of my son a come to mi and say him want something and mi nuh have nutten fi offer him," she said.

Wilson said that since the video, she has been receiving offers of friendship, but she is not interested.

"All along I was here and nobody recognise mi, mi nuh wah nuh new friend. Mi just wah say thanks to the person who take the video and run with it and think dem did a disgrace us. See God turn it around and make it in a blessings," Wilson said.