Twitter imposes ban on posting private individuals against their wishes 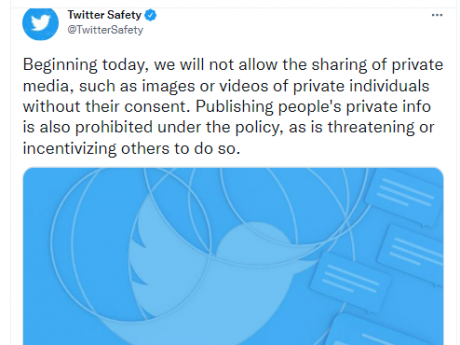 Twitter has announced that it will now allow individuals to request takedowns of pictures or videos featuring them.

The ban is aimed at preventing harassment or invasion of privacy.

However, it does not apply to posts that are shared in the public interest or add value to public discourse.

Also, it is not applicable to people who are public figures like politicians, celebrities, and other well-known people.

“Sharing personal media, such as images or videos, can potentially violate a person’s privacy, and may lead to emotional or physical harm,” reads the blog post.

“The misuse of private media can affect everyone, but can have a disproportionate effect on women, activists, dissidents, and members of minority communities.”

Complaints may be submitted by the subject of a video or image or by someone representing them.

The rule potentially covers all media of private individuals without the permission of the persons depicted.

Twitter will also take other contexts into consideration, as well as existing rules like a ban on non-consensual sexual imagery.

The goal is to remove pictures or videos that are fuelling online harassment campaigns.