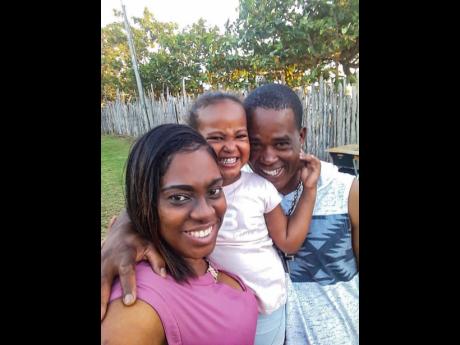 Latina Bromfield-Robinson (left) with her husband Dave and their daughter Rhizuri.

For more than a decade, Latina Bromfield-Robinson, 37, said she was ridiculed for not having children.

But after much heartbreak, the Neis Mountain, St Elizabeth, resident is the proud mother of an almost four-year-old girl.

"It was very depressing as persons used to ask what I was waiting on to get pregnant and I was married. There were persons who told my husband Dave to leave me because I was barren. It was depressing," she said.

Bromfield-Robinson said she got married at age 20 in 2004. "At 21 years old I realise nothing was happening and started to see a gynaecologist. I cried after each visit because the results were never good. My hormones were out of range and my husband's sperm count was low. I had stopped visiting that gyno a year later when he said to me that in order for me to have a child, I would have to sell all of my possession and visit the university hospital because there was nothing he could do for me," she said.

She said the doctor suggested in vitro fertilisation but the procedure was too expensive. Seven years later, nothing had changed.

"We visited another doctor and I was placed on fertility pills which didn't work and I did a number of tests. I had polycystic ovarian syndrome and another condition that tricked my body into thinking I was pregnant. I still wasn't ovulating," she said. Bromfield-Robinson said she was then referred to another gynaecologist in Kingston. It was then that she discovered that her ovaries were oversized and overworked because of cysts.

"I did a surgery to downsize in 2013 and he told me that I had three years to get pregnant naturally. Shortly after that I began having a monthly period but I still wasn't getting pregnant and went into depression because time was catching up on me," she said. But in December 2016, they were shocked when she got a positive pregnancy test result. But having been disappointed before, she didn't celebrate.

"I thought something was wrong and that the test had expired. I did another test and it was positive again and I told myself that the test wasn't working," she said. But Bromfield-Robinson said her pregnancy was far from smooth and she had to do 16 ultrasounds. A blood test also revealed that she had tested positive for dengue fever and the dreaded ZIKA virus.

"That was 2017 and at that time everyone was talking about what the 'ZIKA babies' look like and I was age 32 and it was my very first shot at pregnancy. I cry morning, noon and night. In addition to that, my baby did not have any fluid around her and the doctors were saying that my body was pressing against her because she couldn't move around. They told me that it was a strong possibility that she may be born with her limbs pressed against her and her face would be flat," she said.

The couple were overjoyed when their healthy baby girl was delivered via C-section on July 27, 2017 at the Mandeville Regional Hospital.

"I was happy. I just couldn't believe it. She didn't come with all the facial deformities or small head. She speaks very well and likes to play. I'm just encouraging women who are having problems getting pregnant to see a doctor and try as best as possible to ignore the negative criticisms. I am also encouraging persons to desist from criticising a woman who is childless. It is depressing," she said.