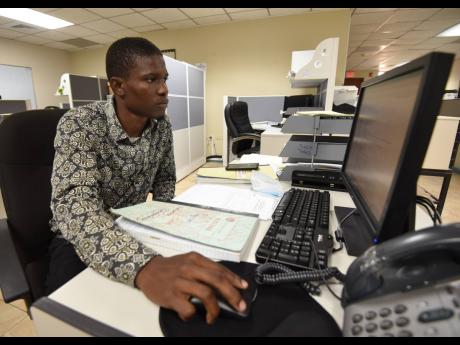 Omar Moodie, a former windshield wiper, is now a record officer at the Ministry of Housing, Urban Renewal, Environment and Climate Change.

Up until five years ago, Omar Moodie was skipping from car to car, wiping windshields at Devon House in St Andrew. Like many persons who take on this sometimes demeaning job, Moodie started when he was young. He was only 13 years old when he picked up a squeegee and a bottle of water and went hunting for cash.

The Majesty Gardens, St Andrew resident said he turned to windshield wiping because of his family's financial difficulties. He said that his mother, who was single and unemployed, could not afford to send him and his siblings to school.

"It was very hard for us, very hard; I can tell yuh, who feels it knows it. But at the end of the day, I have a determination fi seh I want a change. I had to start from somewhere, so I started at Devon House, started wiping glass to gain a little more so I can facilitate myself to go to school," said Moodie.

On average, Moodie said he made approximately $5,000 a week wiping windshields. He said that the funds went towards his schooling, as well as to help his mother to buy groceries. He also told THE STAR that working on the streets was a difficult experience.

"Out there was like dog eat dog, but yuh affi firm, because yuh see if yuh nuh firm, yuh gonna lose your way out there. So I had to keep my composure out there, keep my discipline, my honesty to keep going forward because it was very ruff out there," said Moodie.

The 22-year-old told THE STAR that although windshield wiper was his only option at the time, he knew it was a means to an end. So he ensured that school was always a priority by going to classes in the day, wiping windshields in the afternoon, then going home to study and do his homework. However, after dropping out of high school at 16 while in grade 10, his dreams of becoming an entrepreneur appeared to have faded. This was until the HOPE Windscreen Wiper Intervention Initiative changed his life.

The programme seeks to equip participants with the necessary skills, behaviour and attitude to promote their personal growth and development.

"In 2017 when I started the HOPE programme, it gave me hope, so I told myself there was no turning back 'cause I just wanted to go forward, and that was my aim," said Moodie, who is not only working to get his life on track, but is constantly seeking to motivate other windshield wipers.

He keeps the powerful words of actor Sylvester Stallone at the forefront of his mind and often shares it it windshield wipers. 'The world ain't all sunshine and rainbows. It's a very mean and nasty place and I don't care how tough you are, it will beat you to your knees and keep you there permanently if you let it. You, me, or nobody is gonna hit as hard as life. But it ain't about how hard ya hit. It's about how hard you can get hit and keep moving forward. How much you can take and keep moving forward. That's how winning is done!'

"That is my motto, so I wish you guys out there could read this article or listen it and make it your daily motto and keep going forward," said Moodie, who is now a record officer at the Ministry of Housing, Urban Renewal, Environment and Climate Change.

He is currently enrolled in a HEART/NSTA Trust construction course, and has his eyes firmly placed on his goal of one day owning multiple businesses in the clothing and transport sectors.