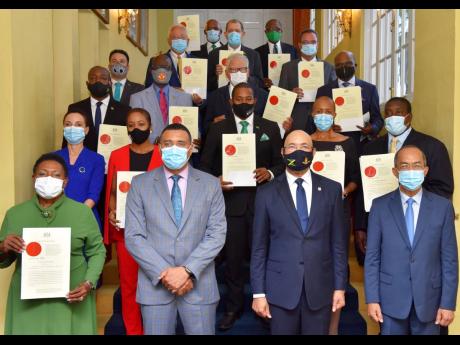 This, he said, should include "habits and practices of loyalty, empathy, accountability, duty and determination, energy and encouragement, respect, selflessness, honour, humility, integrity, innovation, passion for and pride in your work." Allen said that Jamaicans are looking to their leaders for clear signals, actions, and direction that will encourage economic, social and political stability.

The 14 ministers and the attorney general were sworn into office during a ceremony at King's House. Among those taking the Oath of Allegiance and the Oath of Office are veterans maintaining their portfolios from the previous administration. These include Olivia Grange returning as minister of culture, gender, entertainment and sport; Delroy Chuck, returning as justice minister; Edmund Barlett as tourism minister; and Robert Montague, retaining the transport and mining ministry. Marlene Malahoo Forte was again sworn in as attorney general.

In addition to local government, Desmond McKenzie has also been tasked with rural development. A somewhat controversial selection was that of Daryl Vaz, who is now minister of energy, science and technology. The labour and social security ministry will be run by Karl Samuda, who was previously education minister. Another veteran in a new role is Audley Shaw, who assumes responsibility as minister of industry, investment and commerce. Fayval Williams returns to the Cabinet but with a different portfolio; she takes on education, youth and information.

Among the younger members of the Cabinet are Floyd Green, minister of agriculture and fisheries; Pearnel Charles Jr, minister of housing, urban renewal, environment and climate change; and Matthew Samuda, minister without portfolio in the national security ministry. Firebrand Everald Warmington and senator Aubyn Hill are ministers without portfolio in the Ministry of Economic Growth and Job Creation. Hill and Matthew Samuda were also sworn in as members of the Senate. Four other ministers were sworn into office on September 7 by Allen.