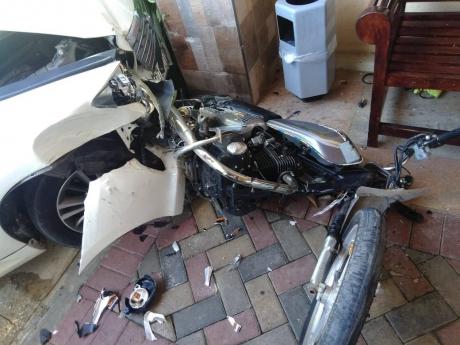 The motorbike that the men were travelling on when they attempted to rob occupants of a car.

Two men on a motorcycle who attempted to rob persons in a car yesterday in Negril were captured after the driver rammed them with his vehicle.

The police have not yet released their identities. Reports are that shortly after 12:30 p.m., the driver of a Toyota Crown motor car and other occupants were travelling along the West End corridor when the two men pulled up beside the car, and ordered the driver to pull over, which he refused.

The other man, who received serious injuries, was taken to hospital under police guard. The police also seized the motorcycle and a loaded 9mm pistol.

Head of the Westmoreland police, Superintendent Robert Gordon, said that both men reside in the Negril area, but one is originally from Clarendon.

"Their intentions were to rob the occupants of the vehicle, but swift thinking on the part of the driver resulted in both men being captured, and another illegal firearm being removed from the hands of criminals, and off the streets of the parish," he said. "This just goes to show that the police, and likewise residents, must be viligant, and we will always be successful in capturing criminal such as these." Gordon added that both men would be processed to see if they have been involved in other robberies in the division.