Parents and 2-y-o killed in crash 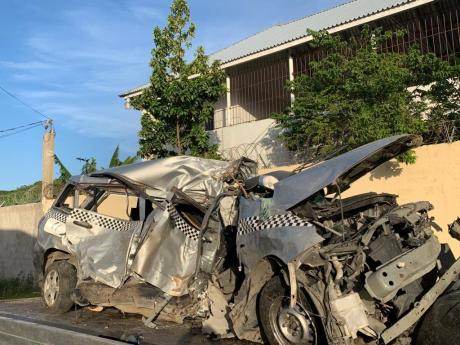 The wreckage of the Nissan motor car in which the family was travelling along the Rose Hall main road in St James.

A family of three, including a toddler, died as a result of injuries they received in a crash on the Rose Hall main road in St James on Tuesday.

They have been identified as 40-year-old Mark Brown, 39-year-old Tangria Grant, and two-year-old Jamar Brown, all of Sun Valley Road in the parish.

Reports from the Barrett Town police are that about 10 p.m., Brown was driving a grey Nissan AD Wagon motor car along with Grant and Jamar heading towards Falmouth.

On reaching a section of the roadway, Brown lost control of the vehicle and collided into a tree. The police and fire brigade were summoned and all three were rushed to the hospital where they were pronounced dead.

Grant was pinned in the wreckage had to be cut out by the firemen. Alleged eyewitnesses said that the impact of the crash resulted in the car wrapping itself around the tree.

They also said that Brown swerved to avoid water that had settled on a section of the road. They say the water is flowing from a broken pipe.

Since the start of the year, 21 persons have died in 19 accidents in St James.