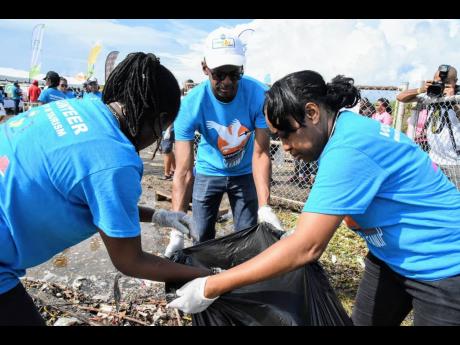 Executive Director of the Tourism Enhancement Fund (TEF), Dr Carey Wallace, says the ban on single-use plastics has reduced the amount of plastic pollutants collected along the Palisadoes coastline on International Coastal Cleanup Day, this year.

"Last year when the TEF participated in International Coastal Cleanup Day, we noticed a lot of single-use plastics like straws, scandal bags and styrofoam products. However, this year there was a noticeable reduction in the number of these products we cleared from the coastline," said Wallace.

He noted that data from the Jamaica Environment Trust (JET) shows a 30 per cent reduction in the number of single-use plastics collected this year along the Palisadoes Strip on International Costal Cleanup Day (September 21), when compared to last year.

Wallace said that the TEF welcomes the positive impact of the ban and is encouraging the Government and citizens to continue playing their part in preserving the environment.

"One of the great things we showcase as a tourism destination is our natural beauty, so we need to safeguard it by taking care of the environment," he emphasised.

He pointed out that in addition to partnering with JET to commemorate International Coastal Cleanup Day annually, the TEF is currently engaged in a project to replant corals in an attempt to regenerate the island's coral reefs. This forms part of their wider effort to preserve the environment and support those who do.

"We partner with NGOs such as JET, where we support and sponsor campaigns promoting eco-friendliness such as 'Nuh Dutty Up Jamaica'. We also partner with the Ministry of Tourism to promote their eco-friendly programme in schools," Wallace said.

He informed that the TEF will be financing the procurement of a recycling truck for Negril in the upcoming year.