Ex-cop OMI honoured by the JCF 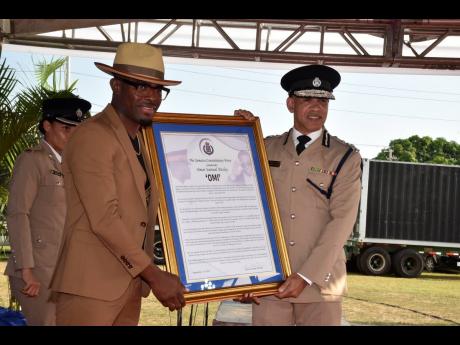 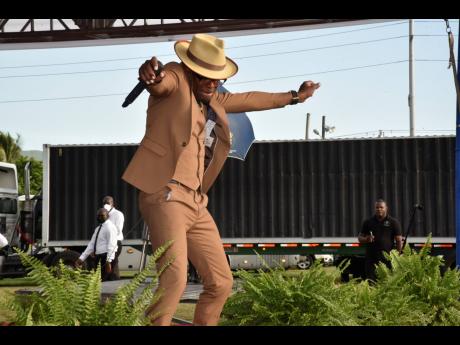 OMI performing at the ceremony.
1
2

Former policeman and reggae singer, OMI, could hardly contain his joy when he was informed that he had been selected as the first recipient of the Jamaica Constabulary Force (JCF) Special Award for consummate contribution to the organisation.

He received the award at a ceremony on Thursday at the Police Officers' Club, along Old Hope Road in St Andrew.

"I was a policeman for three years, 10 months and 13 days and I treasure those moments," the former Constable Omar Pasley told THE WEEKEND STAR. "I could never bash the force because the experiences there taught me so much and helped to equip me for my journey ahead. The lessons that I learnt at the university called the JCF have carried me through life and here I am now being honoured by the force. It is a wonderful feeling."

It was in 2009 while a recruit at the police training school that OMI met internationally renowned manager and producer, Clifton 'Specialist' Dillon. The former manager of two-time Grammy Award-winner, Shabba Ranks, was impressed with OMI's talent and pledged to make him a star. But there was one condition before he could ink a deal with Dillon's Oufah Music label; he had to finish school.

"When I met Mr Dillon and we started working, the people who he would play my music for asked him why he didn't let me quit training school. He told them, 'No, let him finish and spend some time in the police force because he is going to need that same discipline when he starts doing music professionally.' Well, I am forever grateful to Mr Dillon for his wisdom. He would have known the drawbacks of fame and the qualities that I would need to handle it. I'm happy that I got the training from the force," OMI said.

He knew it would be a matter of time before he would have to give up being a policeman because "both careers couldn't coexist". By 2012, OMI was part of the musical ecosystem, recording and releasing songs accompanied by music videos. His big breakthrough came in 2015 with Cheerleader, a local hit which was remixed by German DJ Felix Jaehn and made a splash internationally, claiming the top spot on charts from Sweden to Australia and also on the Billboard 100.

OMI signed to Ultra Music, a part of Sony Music, and released his debut album Me 4 U in 2015. In 2016 he was nominated for Crossover Artiste of the Year at the Billboard Latin Music Awards and Top New Artiste and Top Selling Song at the Billboard Music Awards. He has since collaborated with artistes such as Shaggy, The Vamps, Marcus and Martinus, and Bob Sinclair.

In 2019, OMI debuted a tribute song to police officers titled, To Serve and Protect.

"The intention of this song is to bridge the gap between the public and the police and highlight the daily sacrifices that members of the force make as they serve and protect. I want to allocate all the proceeds generated from this single to a special fund for police officers," OMI explained.

He was excited about performing at Thursday's Police Week event and shared that while at rehearsals, he watched the drill team going through their paces and it "sparked a memory and it was a gratifying feeling".

In recognising OMI, the JCF said, "This award is grounded in the honoree, having served and exited the organisation honourably, remaining a proud JCF ex-member who speaks well of the organisation, and its impact on their personal and professional development."