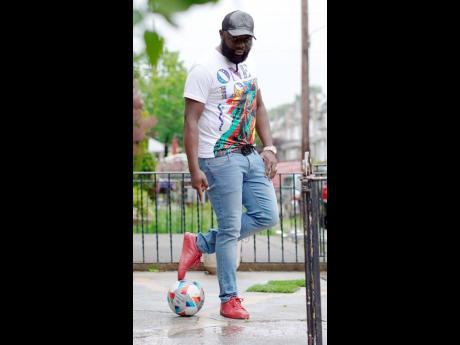 US-based reggae singjay Alton G. Campbell, better known by his stage name XKhraig, is riding a wave of success as his latest single, I Think She's Perfect, soared to number one on the iTunes Reggae Chart this week.

The single also took over the number one spot on the Gambia Top 25 song chart on iTunes.

"Last year, a producer in Philadelphia gave me the rhythm and I wrote the song, but he failed to put it out. I believed in the song, so I got inspiration and teamed up with producer Michael 'Angel' Adams and got a beat and we dealt with it and it's a huge success in Africa, maybe because of the mash-up of Swahili, Patois, Hebrew and English," he said.

The song was released on the Dubplate Express label on May 30. The song is also being promoted by his manager, Adrian 'Johno' Hillary.

Hailing from the rough streets of Constitution Hill, St Andrew in Jamaica, XKhraig was introduced to music at an early age by family members who influenced him to join the church choir.

According to him, as the years went by, he developed an endearment for singing and the art of writing, revealing that his parents ensured education was at the forefront of his development.

"If not for music, I would have pursued a career as a mathematician or an educational psychologist," he explained. The artiste said that he uses real-life experiences in his music and lyrics, and, having lived through many hardships growing up, he now taps into his music to narrate those stories and bring them to life.