Take care of you, says Nesbeth - After multiple tragedies, entertainer advises colleagues to be aware of their mental health 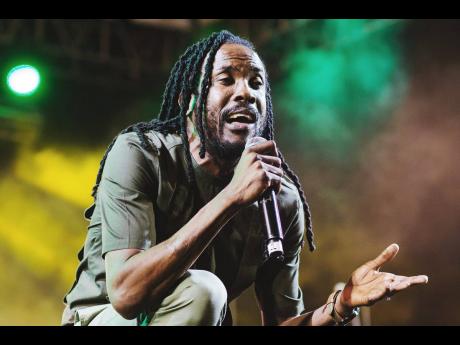 The death of one family member would be enough to send any sane human spiralling down the path of depression; so imagine losing six relatives in six years.

That is the great tragedy reggae singer Nesbeth faced having lost his wife, grandmother, mother, sister, aunt and little brother all in a short space of time.

But, when one listens to Nesbeth speak or witnesses his interaction with his children, a broken man is not what one will see.

Instead, the My Dream singer is the epitome of mental strength.

When asked how he manage to stay strong, he said "Prepare yourself for the dark days because they will come."

It was a fitting conversation for World Mental Health Day which was celebrated yesterday.

Pointing out that his unique circumstances became overwhelming at times, Nesbeth revealed that there were days when he questioned life.

"When things of such a nature kept happening again and again, my first question was 'Is life attacking me?' Tragedy after tragedy, I kept asking 'What is this?' Everytime I lost someone, it was fresh. It wasn't a feeling you ever got used to because each family member was unique and held a special place and was attached to me in different ways," he said. "But even in my darkest moments, I never allowed myself to be consumed by tragedy to the point where it affected my mental health because I couldn't. I have a great responsibility in raising my kids and just that alone was enough to keep me from falling into that dark space."

Another thing that kept the entertainer going was the thought that there was always someone going through worse.

"My mom was 54 years of age when she passed on and even though that was hard, I thought about the people who are alive that don't know dem mother and never spend time with her. I had many wonderful years with my mother," he said. "My wife passed away but I had her long enough to make her my wife. There are people who have girlfriends or boyfriends who they wanted to marry but didn't get to because they lost that person before that could happen."

He said people can find comfort in the most uncomfortable situations.

"Think about what you have going and if you become overwhelmed, find someone to talk to," he said. "As entertainers, everything in our lives are magnified but we have to be responsible for our own mental health ... take a break and take care of you. If that means spending time with your children, do that. If it means taking a vacation, do that."