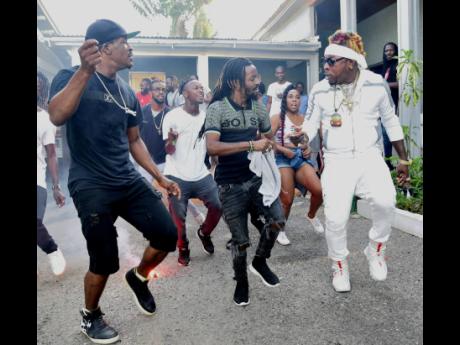 Elephant Man (right) leads the dancing at the meeting of the collective yesterday at Downsound Records.

The Energy Gad is back, and near everyone agrees that 'him find it'. Available on all platforms today, the colourful dancehall artiste's latest, long-awaited release is a much larger project than it appears.

Not just any single, Find It is the first overture of a fiery musical production outfit, full of popular, accomplished entertainers and creative professionals called BadCoMpany/DSR.

On Wednesday, Skatta Burrell posted a video teaser of Find It on his Twitter profile. The star-studded clip is set in a Downsound Records' studio, showing a company of happy, dancing stars holding a high-energy vibe.

In 24 hours, it quickly climbed to more than 45,000 views, and generated a stream of comments, hailing Elephant Man's return to the dancefloor - which has been commanded by Ding Dong and the Ravers for quite some time.

"We trying to bring across the dancehall music to the fans in the best way as possible. There is a time for us to unite for a cause. This is for music. This is our mission. And we ah do it the right way," Elephant Man told THE WEEKEND STAR.

The 'right way' will be propelled by this collective and other creatives being focused on taking dancehall back into the soundscape it dominated in the early 2000s; they will help encourage positive treatment of the dancehall space.

"You know like when you look down [Saudia Arabia], you see the kids them ah try come across the border and them drown? Nobody response fi dem. Nobody nah talk. That's how them ah treat dancehall - very bad. We need to stand fi sumn - or fall fi nuttin," he said.

And what exactly is BadCoMpany/DSR standing for?

"Enjoyment, life, music - the real way. How we do it, we have fun. We keep it unified. We ah drink, we ah eat. Everybody you see yah so, the whole ah we - we just a play we part. Find It is just the first one out of the camp. Mi neva wah say it, but the next one is Coolie Dance ... remix! We're doing the teaser for the Coolie Dance, Cinderella and... I think you're gonna be here next week," the Energy Gad smirked.