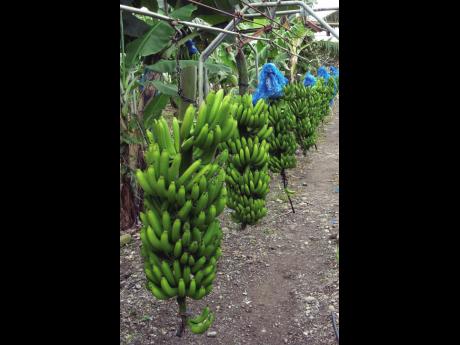 Banana farmers have been urged to be vigilant in protecting their farms from a disease that could wipe out their business.

The disease has been confirmed in Colombia, where over 150,000 hectares of banana and plantains were been destroyed in an effort to contain it.

Jamaica is restricting the importation of banana, plantains and any relatives of the plant family as the country is now on high alert for the Tropical Race 4 (TR4) disease, previously called “Panama Disease”, which attacks the crops.

Agriculture Minister Audley Shaw, in a statement in parliament this week, said that TR4 is considered one of the 10 most notable diseases in the history of agriculture “and is the most destructive disease to have affected bananas, plantains, and the Heliconia plant.”

Janet Conie, general manager of the Banana Board, said farmers must ensure their farms do not become contaminated.

“We are engaging farmers now to ensure that they prevent the disease from coming here. They must ensure that only authorised persons enter their farms and to restrict access to farms by persons who have visited banana farms overseas,” Conie said.


“We are telling them to prevent persons who have visited banana farms overseas, especially in Latin America and Colombia, from coming on your farm, unless it is absolutely necessary,” she added.

The banana fungus is spread through infected plant materials and infested soil particles attached to any item such as farm tools, shoes, clothes, animals and vehicles.

Symptoms include premature yellowing, buckling and dying of leaves and plant; splitting at the base of the trunk, and darkening of water and food channels of the banana and plantain varieties.